A month ago, the media reported that the 18-year-old daughter of businessman Alexander Chigirinsky (55) (owner of the development company Snegiri Development) Irina is getting married to a young man named Morice. A girl who has grown accustomed to luxury since childhood, has decided to throw a really chic wedding for numerous relatives and friends. As a result, only Irina's dress cost 14 million rubles.

It was also reported that at least 16 million rubles will be spent on refreshments for the guests. Fortunately, the father of a girl, whose fortune is estimated at three billion dollars, can afford it.

And on June 17, one of the most brilliant weddings of 2018 finally took place. The event was organized in a country golf club, which belongs to Emin Agalarov's family.

The wedding dress of the girl from Zuhair Murad cost 14 million rubles. Among the guests were Rezo Gigineishvili (36) and Nadezhda Oblentseva (34) (who recently no longer hide their romance), Igor Krutoy (63), Marina Yudashkina (60), Arkady Novikov (55), Stella Aminova and Tamuna Tsiklauri .

According to our information, 1200 guests were invited to the wedding.

There was a celebration in the Agalarov Golf & Country Club, and the entire domestic show business entertained the guests: Sergei Shnurov (45), Valery Meladze (52), Ani Lorak (39), ST (29) and Grigory Leps (55). Were the wedding of Nikolai Baskov (41) and Maxim Galkin (42).

In short, this wedding can to claim the title of the most luxurious Russian wedding in 2018.

All the details of the event are in our review!

Irina Chigirinskaya walked down the aisle in a dress from the Lebanese designer Zuhair Murad, who is famous for his wedding dresses.

The bride's dress was adorned with thousands of precious stones. It costs 14 million rubles.

By the way, in 2015 Irina's sister, Maria, choosing a wedding dress, also gave preference to the house of Zuhair Murad, and the wedding ceremony itself was no less elegant.

According to the established in the family of the Chigirinsky tradition, the weddings were hosted by Maxim Galkin, this time Nikolay Baskov became co-host.

Nikolay Baskov and Maxim Galkin with a wedding guest

Maxim Galkin with a wedding guest

Performances of the stars

As for the artists who performed at the wedding of Irina and Morice, this list turned out to be impressive - the group "Leningrad", Ani Lorak, Grigori Leps, Valery Meladze, Emin Agalarov, Igor Krutoy and not only.

Iset Hajiyeva with her daughter

The cake, ordered by the couple, deserves special attention. The confectioner Renat Agzamov, famous for to the show "Confectioner" on the channel "Friday!", made the main dessert of the evening.

"I congratulate Irina and Morice on this beautiful day! PS: water jets are made from caramel", - commented on his product member of the Russian Olympic team for confectionery (yes, we were also surprised).

Sister of the bride Maria Chigirinskaya

Heiress of the billionaire married the son of the former deputy governor of the Arkhangelsk region, Alexander Mirelli - Morice.

We already told that for Irina opted for the dress of the Lebanese designer Zuhair Murad. Yesterday the girl showed the guests a dress encrusted with stones for 14 million rubles.

A huge marquee was built for the wedding at the golf club. Tables filled with all sorts of culinary delights. Guests were treated with salmon carpaccio, all kinds of fish, Uzbek pilaf, shish kebab, Iranian apricots, fresh berries and cake Renata Agzamova.

The guests of the bride and groom's family spent at least 30 million rubles to treat guests. After the bride and groom performed a wedding dance, Ani Lorak appeared on the stagea and arranged a one-hour solo show. Lorak was succeeded by Gregory Leps and Valery Meladze. Georgian sex symbols of the Russian stage gathered almost all the guests near the stage.

The bride also received a musical gift from her elder sister Mary: she sang the song Je t'aime to the accompaniment of Igor Krutoy. Several songs were performed by singer Emin, Among the guests were the Yudashkin family, Sergei Kapkov with his wife Sophia, the oligarch Musa Bazhaev, the daughter of President Yeltsin Tatyana Yumasheva, Arkady Novikov with his wife Nadezhda, Lev Leschenko, Alena Shishkova and others.

After midnight the hosts announced the following artists. Romantic wedding songs "I'll kiss your hands" were replaced by Sergei Shnurov's hard obscenity. Although it should be noted that the soloist of "Leningrad" was rough only in the songs. The artist showed off unprecedented sensitivity: he asked the bride what to sing for her, invited all the children to the stage.

At the celebration, numerous friends of the heroes of the celebration gathered. So, Marina Yudashkina appeared at the celebration in the company of Peter Maksakov's son-in-law. The designer's wife chose a short cocktail dress that emphasized all the curves of her figure. 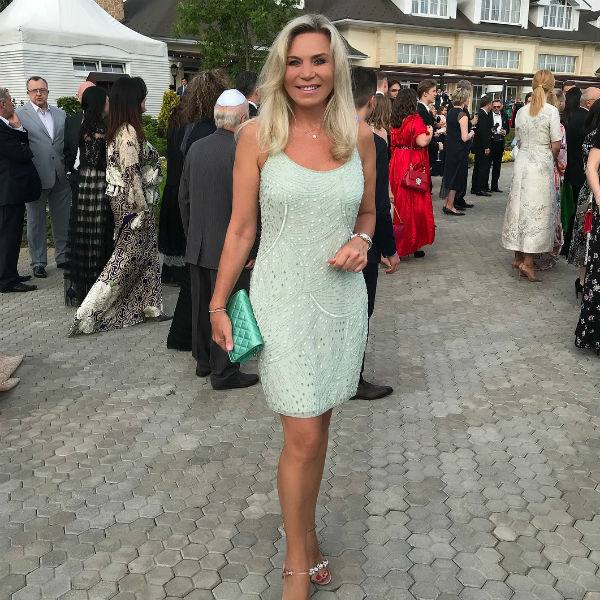 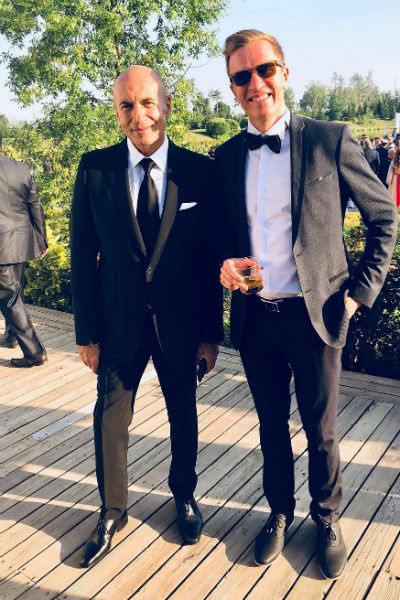 Igor Krutoy has long been friends with the bride's family // Photo: Instagram

Of course, everyone's attention was focused on the bride. The outfit of Irina Chigirinskaya from the famous Lebanese designer was richly decorated with lace and precious stones. The girl supplemented the image with a modest white veil. Her fiance Morice gave preference to the classics, namely the black tuxedo. After the traditional Jewish ceremony, the newlyweds went to the banquet hall, decorated with numerous floral arrangements. The bride and groom with guests

A little later, Grigory Leps and Valery Meladze appeared at the festival. The stars performed their most famous songs, and the guests danced with pleasure to their favorite hits.

It should be noted that smart weddings are common for the Chigirinsky family. In 2015, the businessman arranged a no less splendid holiday for his eldest daughter Maria, and in the summer of 2017 he married son Mikha. Children of the oligarch have grown accustomed to luxury since childhood. So, Irina repeatedly boasted on Instagram branded things and flights on private planes. Now the girl is studying at MGIMO and is building ambitious plans for the future.

Tweet
More in this category: « Wedding of Russian billionaire’s daughter Betty and Murad Beniaminov Anastasia Ovechkina (Shubskaya) in Jovani »
back to top