The world premiere of ballet "Nureyev" by Kirill Serebrennikov at the Bolshoi Theater. Some participants came wearing T-shirts in support of the director. The historic Bolshoi Theater hosted the world premiere of the ballet "Nureyev" directed by Kirill Serebrennikov. In particular, the premiere was attended by President's press secretary, Dmitry Peskov and his wife Tatiana Navka. In an interview with Tass Peskov called the ballet "Nureyev" world event. "There are some controversial moments, but in general, probably in terms of creativity and a creative extravaganza event, it's a world event", - he sad.

Writer Ulitskaya told to "RIA Novosti" calls "Nureyev" world-class event. Kirill Serebrennikov's "Nureyev" changes the perception of today's theater opportunities, especially the possibilities of classical ballet. Kirill has ability to reveal new aspects of the theater, to go beyond it, to change the rules and laws of the genre "- Ulitskaja said. She added that the performance - "a complex, multi-layered, intelligent, elegant design, the virtuosity of the troupe." Beautiful music by Demutsky. This world-class event, "- she said. The premiere was attended by former Finance Minister Alexei Kudrin. "The long-awaited premiere of @BolshoiOfficial Nureyev. Actual, real modern ballet. Talent of a great talent. Unfair that Kirill Serebrennikov was not at his premiere, "- wrote Kudrin on Twitter. Earlier, at a briefing artist who performed the title role in the ballet "Nureyev" Vladislav Lantratov told that rehearsals were under the control of Serebrennikov . "Serebrennikov controlled the rehearsals, he did not come out of the process. We knew that he corrected the rehearsal, "- said the dancer.

The first audience, among whom were a spokesman for the head of state, Dmitry Peskov, producer Alexander Rodnyanskiy, businessman Roman Abramovich, actress Renata Litvinova, producer of First Channel, Konstantin Ernst, the former Finance Minister Alexei Kudrin, the TV presenter Svetlana Bondarchuk and many other well-known personalities, appreciated the large-scale production of "Nureyev" choreographed by Yuri Posokhov and directing Kirill Serebrennikov.

all the same in the arena Journalist and TV presenter Vladimir Pozner called the production "outstanding". However, he believes it's not possible to perfrom it often.

The fate of this performance was not easy.

The premiere was held on 11 July , but on 8 July 8 Theater government announced the postponement of the premiere, explaining that the reluctance of the play.

Sources believe that the decision to cancel the "Nureyev" was taken under pressure of the Ministry of Culture - and perhaps personally the Minister of Culture Vladimir Medinsky for "gay propaganda." Even Tsiskaridze once spoke out against this premiere:

"Sometimes I do not have censorship. The theater should follow the norms of decency. I do not understand people who constantly want to see perversion on the stage. I want to enjoy the beauty".

And the general director of the Bolshoi Theater, Vladimir Urin at the briefing said that the premiere of "Nureyev", directed by Kirill Serebrennikov, was moved to May 2018 because of the unavailability of the performance.

" First there was the idea to move to the 2018/2019 season. But I realized that it is impossible to postpone the show for a long time after the run "Nureyev" performance. 4-5 May 2018 plan to the premiere" , - said the head of the Bolshoi Theater.

Urin said that rehearsals began in late January, but due to the fact that from January to February time for the company issued a "fairly difficult" (a festival on the occasion of Yuri Grigorovich's Jubilee and all the artists were fully occupied), and in late May the troupe went on tour to Japan and returned only 20 days before the premiere, the ballet proved unprepared.

Director Kirill Serebrennikov was silent, but on 11 July published a facebook post, in which he thanked the team who worked on the production about an outstanding dancer of the XX century Rudolf Nureyev.

"Rudik [Nureyev] can not exist without freedom. He flew off again. Jura, Ilya, actors, dancers, chorus, all friends and brothers in the theater, all, all, all those who made this show, including the producers and the general director [of the Bolshoi Theater] Urin - Thank you all. As these letters are stored in the "cloud" and not released performances go directly into a special storage, but do not disappear. Friends, I love you all !!! Rudik would be proud of us, I'm sure ", - the director wrote.

Secret "Nureyev" ballet - is about politics, not about homosexuality

At the centre of the play - famous "Christie's" auction , which sold personal items of Rudolf Nureyev. There were two - the French and the American. And I started the show, according to a leading auctioneer, who in two languages ​​glibly talked about lots.

They designed the main accompanying line connecting disparate episodes from the life of the legendary dancer in the whole theatrical canvas. Numerous guests of the auction - the artists (recruited from "Mosfilm" and the Bolshoi Theater) elderly ladies and gentlemen, in a luxurious evening dresses, repeating the famous Nureyev's pas, when transferring lots sold. The main feature of the play - the combination of opera, ballet and dramatic passages.

It all starts with a dance class at Ballet School with portrait of Nicholas II on the wall.

The famous "leap into freedom" - the flight of Nureyev to the west , solved as a patriotic scene involving a large choir - Soviet overweight women in concert dresses with sequins and with recognizable hairstyles.

The phrase "You don't choose your homeland" becomes the refrain of the whole performance and repeated again and again, but in the final. Scammer (Igor Wernick) read out the facts of the real case of the escape of Rudolf Nureyev, and leading the party jumps over the fence, leaving behind and the patriotic choir, and cheerfully dancing young athletes driven into lattice cells. A new Nureyev's life begins. 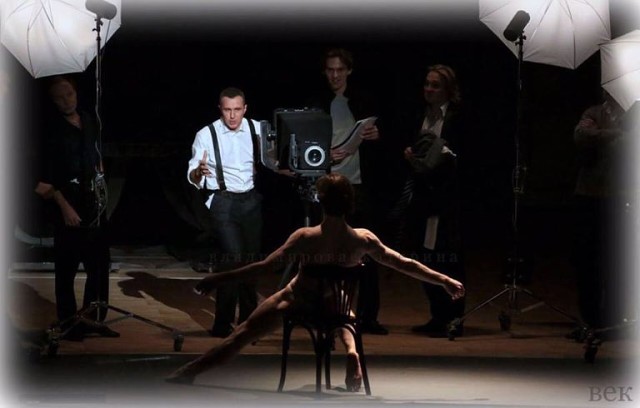 The theme of homosexuality continues in a duet of Nureyev and his mentor, and later his lover - Erik Bruhn (Denis Savin). In black pants, emphasizing the dancer's muscles and turtleneck, with a constant cigarette in his mouth, he hugs Nureyev, dressed all in white - so the male duet. Passion, love and despair intertwine in a provocative, but at the same time delicate choreography of Yuri Posokhov.

The second act begins as an auction. At this time Vladimir Mishka, through the presented items is the story of the creative life of the dancer: gorgeous Margot Fonteyn, who helped Nureyev at the beginning of a career abroad.

Next, a series of changing partners, but Nureyev is soloist. Vladimir Mishka amazingly touching lyrical reading letters written by Alla Osipenko and Natalia Makarova specifically for this performance. In the final the news of the Nureyev's disease come into play. The auctioneer calls last lot - baton with which Nureyev made his debut as conductor of the Vienna Symphony Orchestra. To the applause of the audience the protagonist descends into the orchestra pit and playing the famous "Shadows" by Minkus ballet "La Bayadere". Ballet performs memorized steps. Among Shadows - both men and women. They fill all the space of the stage. Music stops. But the shadows still do their repetitive motion, and Rudolf Nureyev conducts silence. A curtain.

Music by Ilya Demutsky is a real discovery: stylized Soviet songs, soulful lyrical themes, as well as numerous citations of the world ballet masterpieces are formed into an integrated palette of musical revelations. Of course, the main theme of the play - it's not scandalous life of a famous dancer. It is a powerful modern play about freedom and that "you don't choose your homeland". Applause and a standing ovation, which arranged all those involved in the play on the stage of the Bolshoi Theater, speak for themselves. Cried all - from the director to the costumers. This abortive premiere - is history. The history of modern Russia, we do not choose. Lawyer Dobrovinsky expressed his admiration for the grandiose staging, trying thus to keep a critical eye: for him, the Bolshoi literally stepped into the 21st century thanks to the play, but "Nureyev" will hardly enter the permanent repertoire.

"Enormous troupe, complicated staging, insanely expensive - it will never pay for itself I think that it is a gift of Roman Abramovich to Moscow -.. Tribute to the great dancer Nureyev, and a gift to all of us I think, unfortunately, a small group of people  will see it - and I am among the lucky ones , "- admitted Dobrovinsky Premiere, indeed, surpassed all expectations: the presence of awarded artists and creators staging a standing ovation, which, according to witnesses, did not abate for about 20 minutes, and cries of "bravo". In solidarity cap staging authors came in T-shirts with slogans "Freedom to the director," and photos by Kirill Serebrennikov.

All outputs from the premiere of the audience were unanimous in their opinion that "Nureyev" - an outstanding performance, and expressed deep regret that Kirill Serebrennikov has not heard the thunder of applause and did not see his performances.

Alexei Kudrin. on his Twitter posted a photo of the final exit of actors on the scene, noting the lack of injustice.

"The long-awaited premiere of Nureyev Actual, real modern ballet about a great talent. it's unfair that Kirill Serebrennikov was not present at his ballet... " - wrote on Twitter Kudrin. Renata Litvinova admitted that she is impressed by "Nureyev", but the performance is very sad.